Commentary to EN 1992-4 – Design for Fastenings for use in Concrete” DAfStb-booklet 615 now available in English! 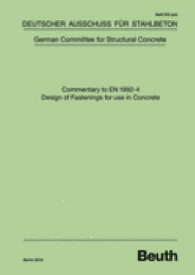 DAfStb booklet 615 is intended to facilitate the practical understanding and use of EN 1992-4 by explaining and presenting scientific principles.

The first part of the booklet contains explanations of the text of the standard, notes on the derivations of many regulations, as well as supplementary application rules. The second part explains the technical reports cited in the standard. The comments in the first and second parts of the booklet were prepared by the DAfStb Technical Subcommittee "Fastening Technology" and adopted in a procedure similar to a standard, i.e. in consensus between all groups involved.

The third part of the booklet contains articles written by members of the DAfStb Subcommittee "Fastening Technology" under their own responsibility and containing further explanations on selected topics. The contributions essentially originate from the cooperation of the authors in the working groups for the development of EN 1992-4. The contributions deal in particular with applications which are not covered in EN 1992–4 and offer engineering solutions.

The commentary booklet can be ordered online.